Your Launch Day Guide to The Shattered Warpgate!

A strange, alien energy of mysterious origin lurks beneath the surface of Esamir - foreboding, unpredictable, and potentially catastrophic. Welcome to The Shattered Warpgate, soldier!

This massive game update has been (many) months in development, predating even last Spring's Escalation update. Not only does The Shattered Warpgate introduce a ton of exciting new features and content, it also weaves the lore and story of PlanetSide into a major content update like we've never done before. This is our most ambitious update since Construction released over 4 years ago, and it reflects our team's commitment to bring you major biannual releases that permanently evolve and expand the world of Auraxis. After weeks of community testing, we're thrilled that The Shattered Warpgate is now available for you to download free on live PC servers.

Read on for all the Intel on The Shattered Warpgate! 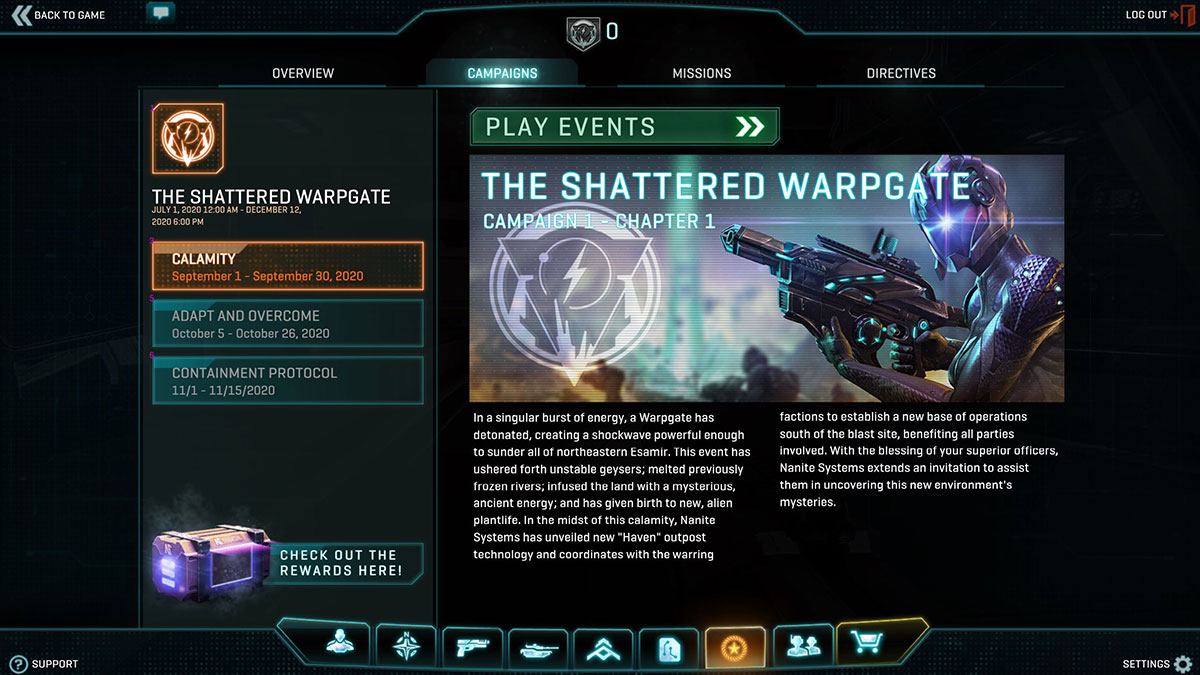 At the heart of The Shattered Warpgate update is our Campaign System, which introduces new open-world storytelling experiences that unfold across multiple chapters. Players will take part in unique, lore-driven Campaign Missions during each Chapter, earning thematic rewards for successful completion. The first Campaign will run for 3 months (1 month per Chapter), though the scope and scale of future Campaigns may change as we iterate off player feedback.

The Shattered Warpgate Campaign tells the story of a cataclysmic environmental event on Esamir triggered by the seismic detonation of the Continent's Northeastern Warpgate. Nanite Systems spearheads the investigation into the mystery behind the event, enlisting the help of soldiers from all Empires to mitigate the disaster. As an investigator, you will be tasked with exploring the origins and impact of the Warpgate's destruction, discovering new revelations and dangers along the way. Can you solve the mystery of The Shattered Warpgate?

Players can opt-in to the Campaign either via Membership (unlocks automatically) or by using Certs (Cert costs scale by Battle Rank to alleviate the requirements for newer players - full Cert costs can be found in the patch notes).

This is just our first Campaign, with future Campaigns set to pickup the story while permanently evolving the world and gameplay of PlanetSide 2, offering new rewards along the way.

The first thing you'll notice in this update is the dramatic transformation Esamir has undergone. It has been many years since the frigid tundra of this classic Continent received a facelift, and this update aims to expand, alter, and improve its visual and geographic landscape.

With the destruction of the Northeastern Warpgate, the resulting explosion has revealed the remains of a mysterious and ancient Vanu superstructure that stands time-frozen beneath a great vortex of swirling energy. The devastation has dramatically altered the landscape: tech failures, derelict bases and vehicles, bursting energy geysers, glacial ice flows and strange new alien plant life now litter the land. 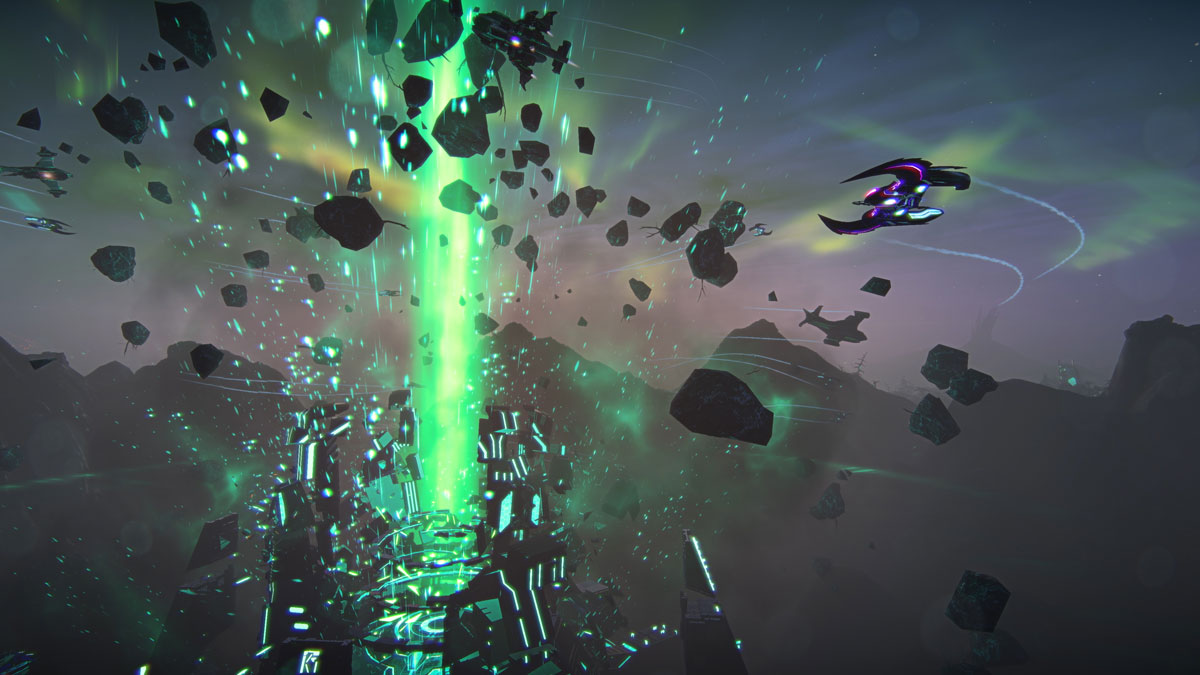 Even the skies glow anew with Auroras and crackling energy, casting a strange green pallor across the battlefield.

In the aftermath of this event, Nanite Systems have unveiled The Haven, the first mobile Warpgate, replacing the now-destroyed Warpgate in a new location to the East. These environmental changes are more than just visual - the Lattice itself has been reconfigured, bases altered or abandoned, and the sudden appearance of a powerful energy storm adds a new threat to contend with... 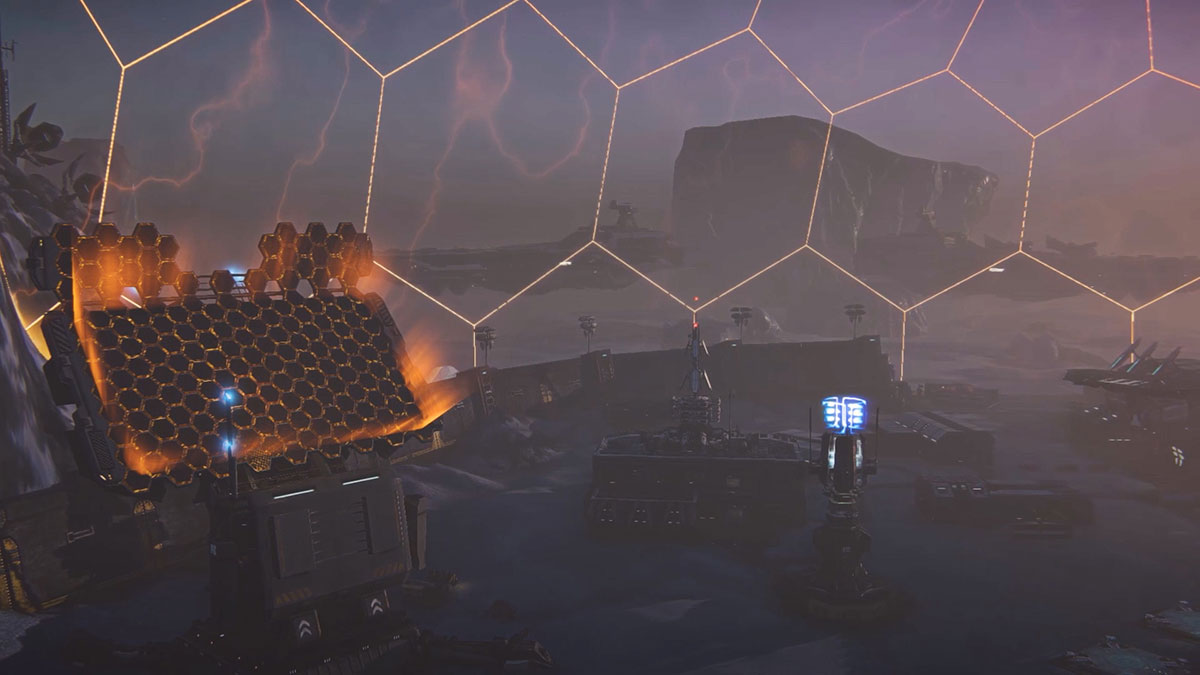 The mysteries behind these dramatic changes can only be unraveled by completing story Missions from the first Campaign, which delves into the origins of the Warpgate's explosion, and the dangerous forces behind the endless planetary war on Auraxis. 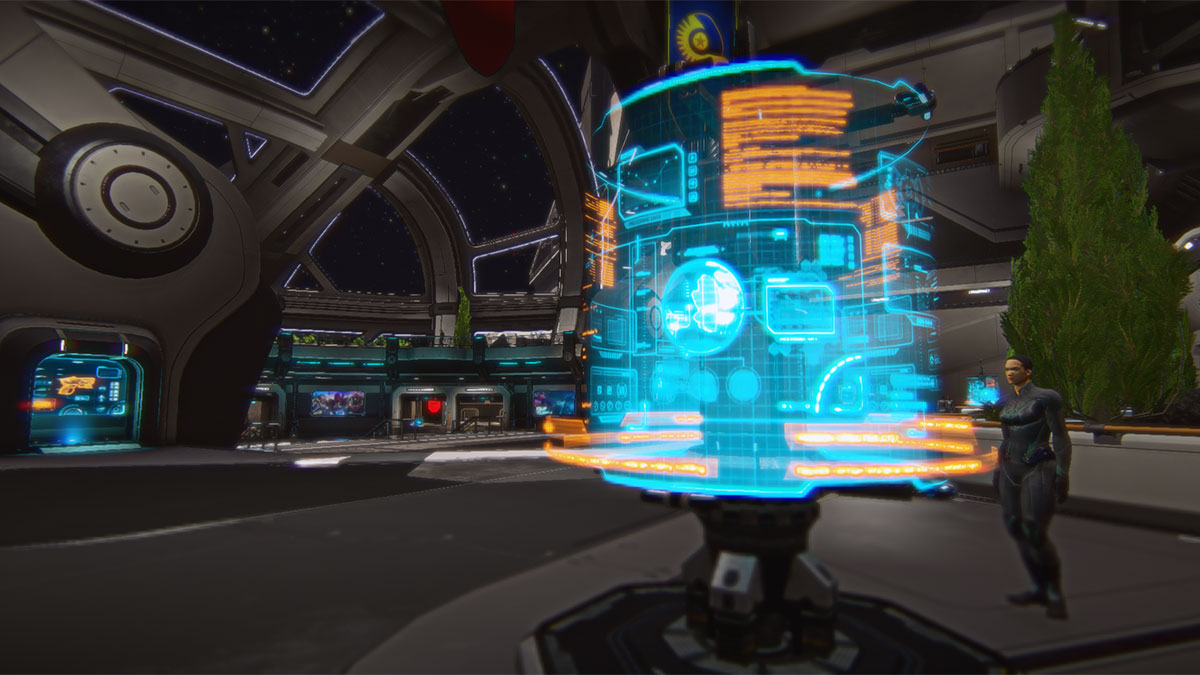 Underpinning the Campaign system is our dynamic new Mission system, introducing daily quests and challenges to PlanetSide 2 that can be completed for rewards. While Campaigns offer unique Story Missions, every player regardless of rank will have access to a regular Mission Board in Sanctuary that resets daily. New Missions are available in a variety of rarities which represent difficulty, time investment, and reward levels. All-Access Members will automatically be granted additional daily Mission unlocks, though all players will have the option to choose which Missions they undertake on any given day.

You can check out the Mission pool in the patch notes, or peruse the Mission Board in Sanctuary at your own pace as you seek out new challenges and rewards! 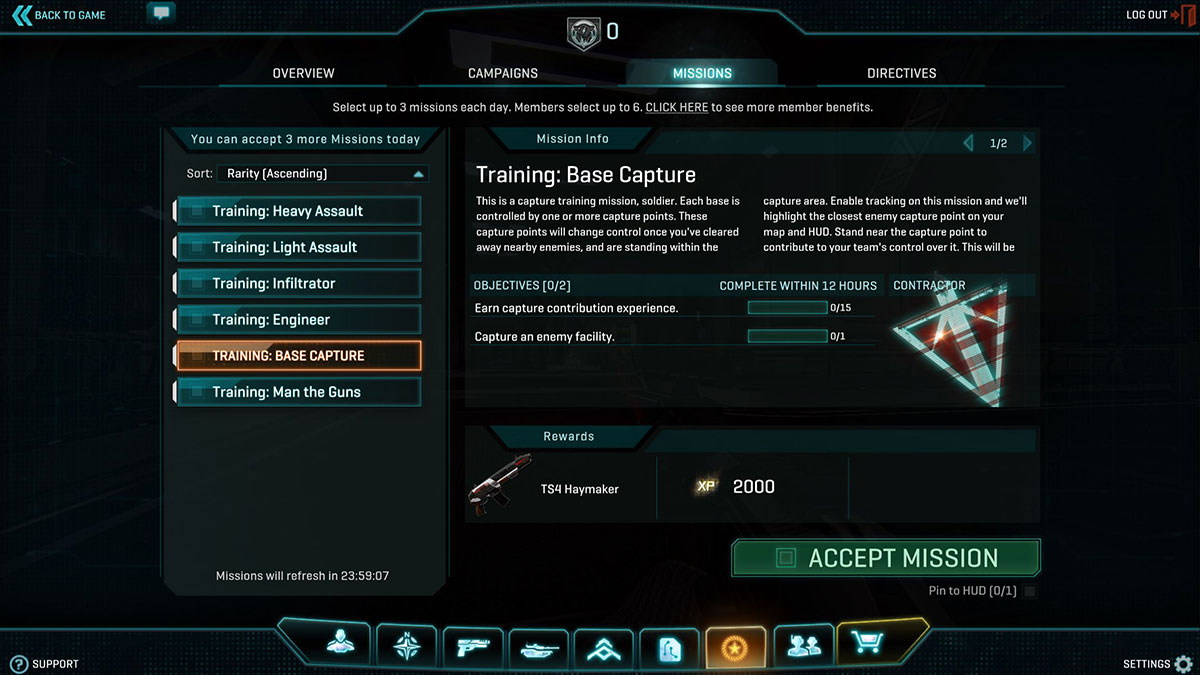 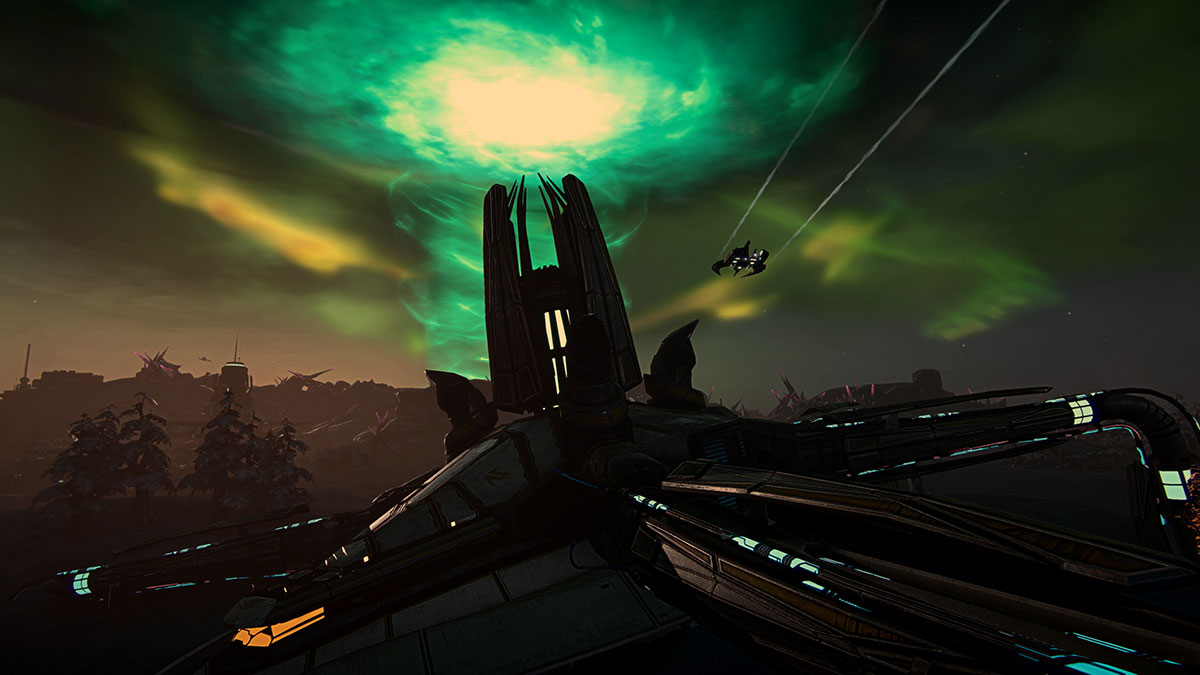 The most profound environmental change to the Continent of Esamir is the introduction of a roaming energy storm, the first hazard of its kind in PlanetSide 2. Attracted to mechanical signatures, the storm targets areas on the map where action is heaviest, putting players - particularly players in vehicles - in danger from powerful lightning bolts. The storm's energy can also impact vehicle handling, though its effects can be avoided or alleviated by sheltering in buildings or leaving the area. Players will also gain new items and abilities to negate and even harness the storm's energy over the course of the first Campaign, including Insulated Vehicle Armor, Lightning Grenades, and the Lightning Arrester deployable.

This is a major change and we'll be carefully monitoring its impact on gameplay, adjusting the strength, speed and effects of the storm based on player feedback. 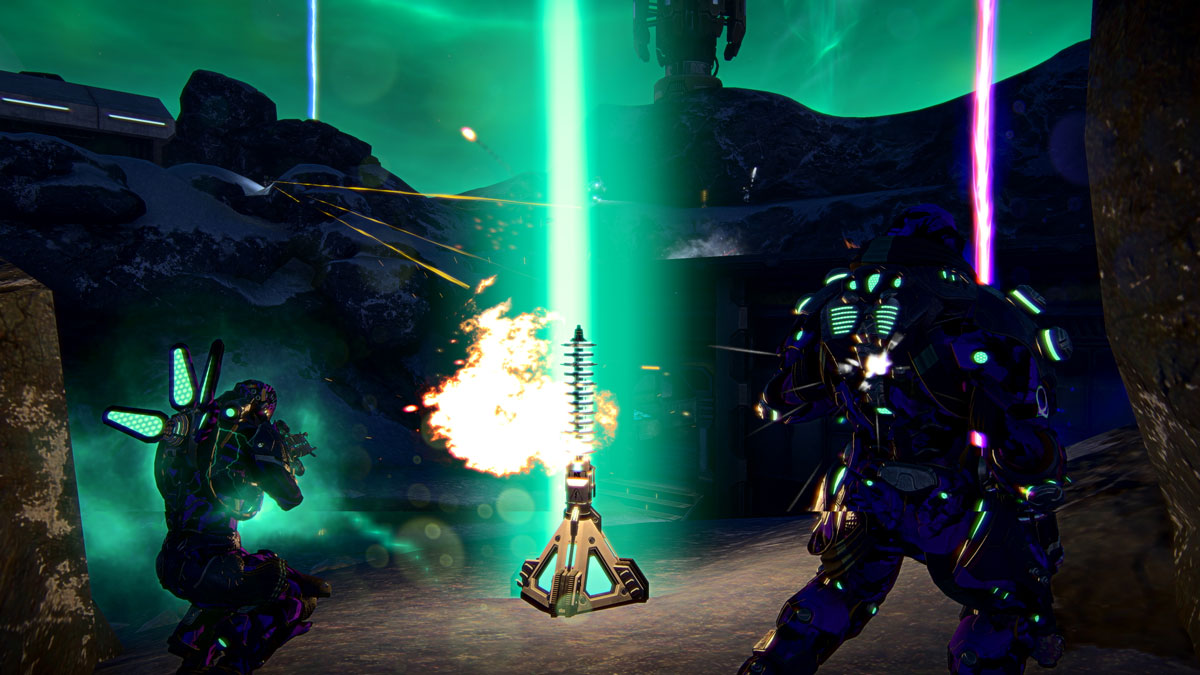 These are just a few of the many highlights coming in The Shattered Warpgate - additional new features include new weapons and equipment like the Icepick Melee Weapon, Sanctuary Improvements like Cross-Faction Text Chat, Outfit Resource balancing, Indar Terrain Improvements, and much more. All of the above has gone through extensive community playtesting on the Public Test Server (a big THANK YOU to all of you who joined us on PTS and helped provide feedback) and will continue to see iteration and hotfixes on live servers.

Full patch notes for The Shattered Warpgate are available over on the Forums. We'll address issues as they arise, so please keep pointing them out to us. And once this update is out in the wild, stay tuned for news on our next Double XP For All event...

Are you ready to explore the mysteries of The Shattered Warpgate, soldier? Drop us a line on Twitter, Facebook, or the Official Forums!