This is the Face of a True Survivor 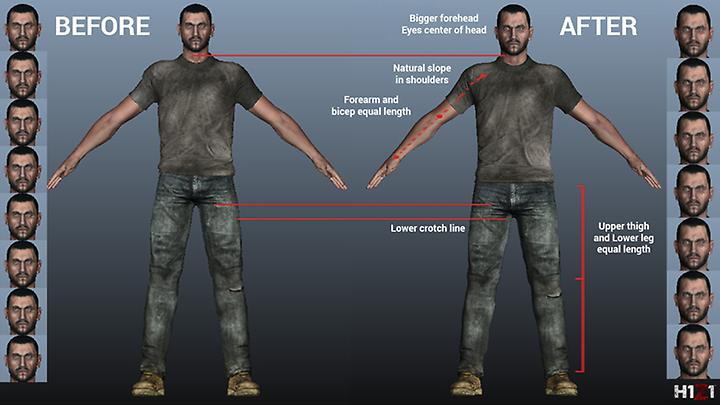 Hello, I'm Sebastian Strzalkowski. I joined the H1Z1 team as Art Director a couple months ago.

Our post EA plan has been to spend a couple months focusing on polish. We have three big goals for the art roadmap: better in-game lighting, more detailed environments, and character revamp.
One of the coolest aspects about working on a project in early access is a chance to include players throughout the iteration process. The player character is a great example of something that commonly gets iterated on many times before launch. In this case our goal has been to create a typical looking male and female player character, but still have personality you could get invested with.
The H1Z1 male player character (or PC) evolved several times since its inception. 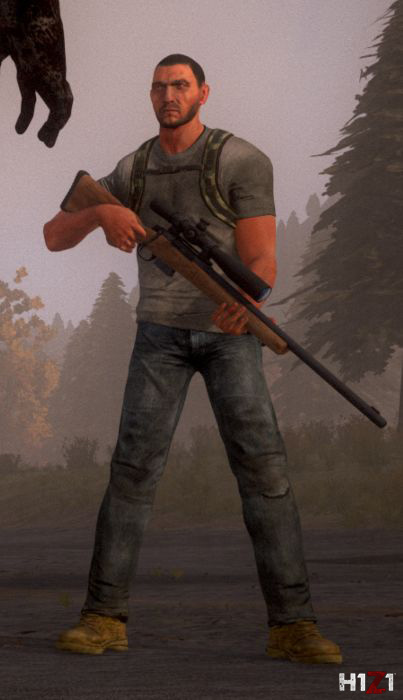 Something was still off with the last iteration. The team recognized and tried to address the symptoms: the head appeared too small, the arms & legs too long and the shoulders too square. This symptom was compounded by animations that stretched the model to its limits, when the arms were raised the shoulders would pinch in unnatural ways, when crouch-walking the arms appeared too long.
The character was based on idealistic anatomy proportions: his body was 8 heads tall meaning you could stack his head 8 times from his feet to his head. This was the source of the problem: we needed to lower the head ratio.

We made the decision to adjust the proportions and animations a few weeks before Early Access. The anatomy changed significantly so many animations had to get adjusted too. These adjustments got done just in time for the January EA release and the current iteration in-game right now. 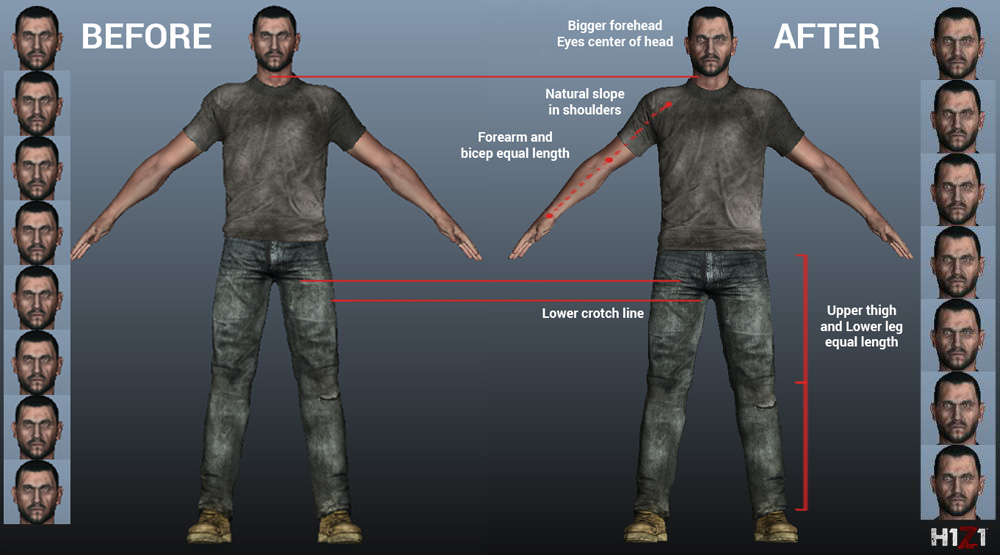 We learned a lot from the last iteration, but it was time to upgrade the model and incorporate our ideas for a new wearable system that will support more slots and customization. Once we went Early Access, the character artists began work on the new male player character. 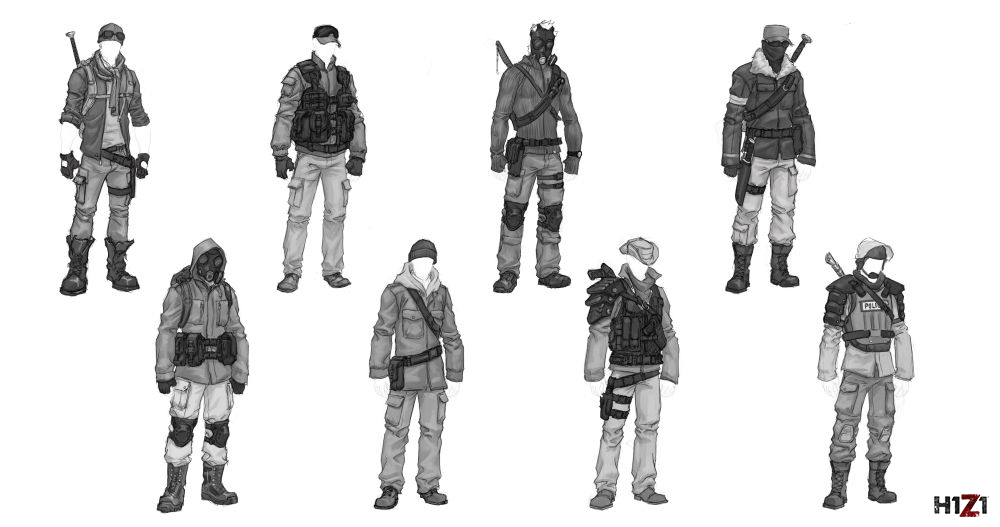 Previously the human male player character model and the zombie models were created as separate characters, but with the character revamp we wanted to make all the humanoid characters (humans and zombies) built with the same wearable system and skeleton in mind. This gives us the ability to create outfits for one body and use for both human and zombie which means more variety for zombies, and paves the way for human player characters to become zombified… 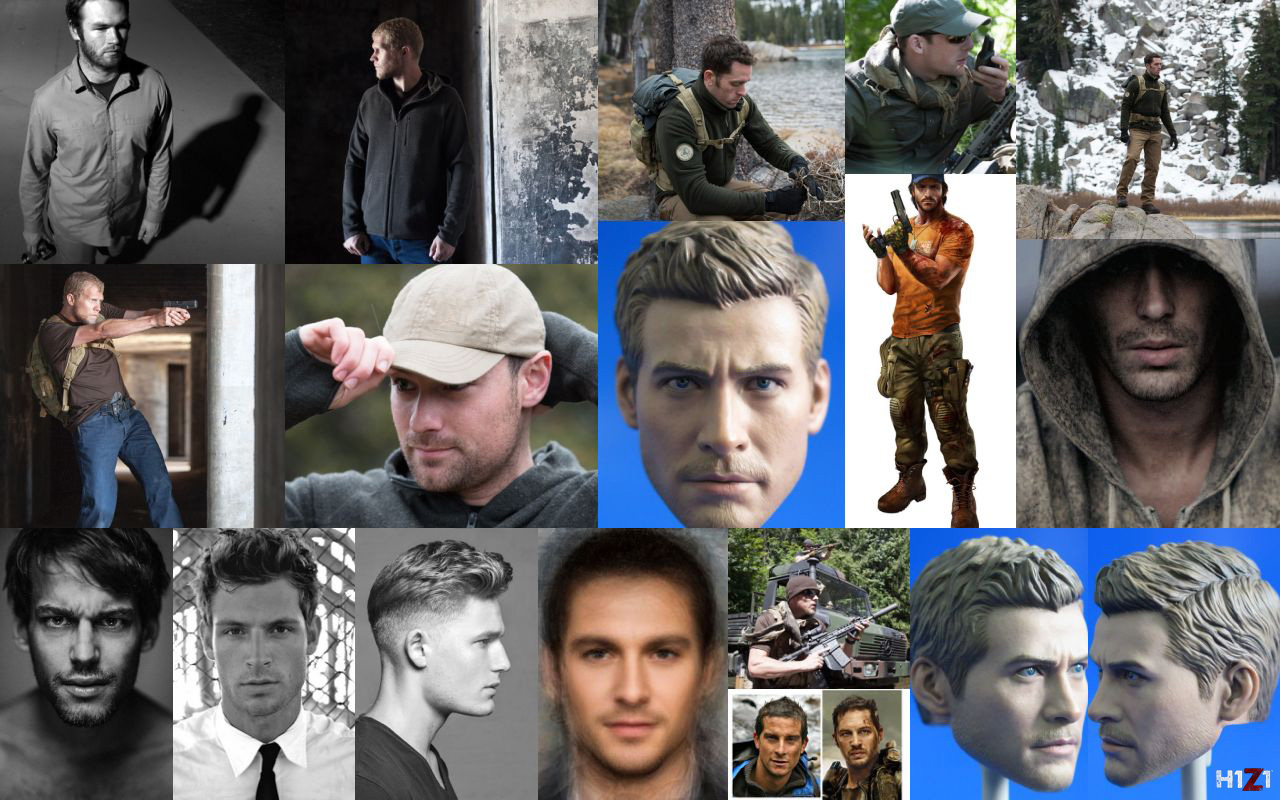 Satoshi Arakawa joined the team and hit the ground running building a new character. We looked at a lot of references and imagined what this character would look like if he lived in the Northwest and survived a disaster of H1Z1 proportions. We wanted him to be attractive and appealing, but not too specific, since players will be using the same model for a while. 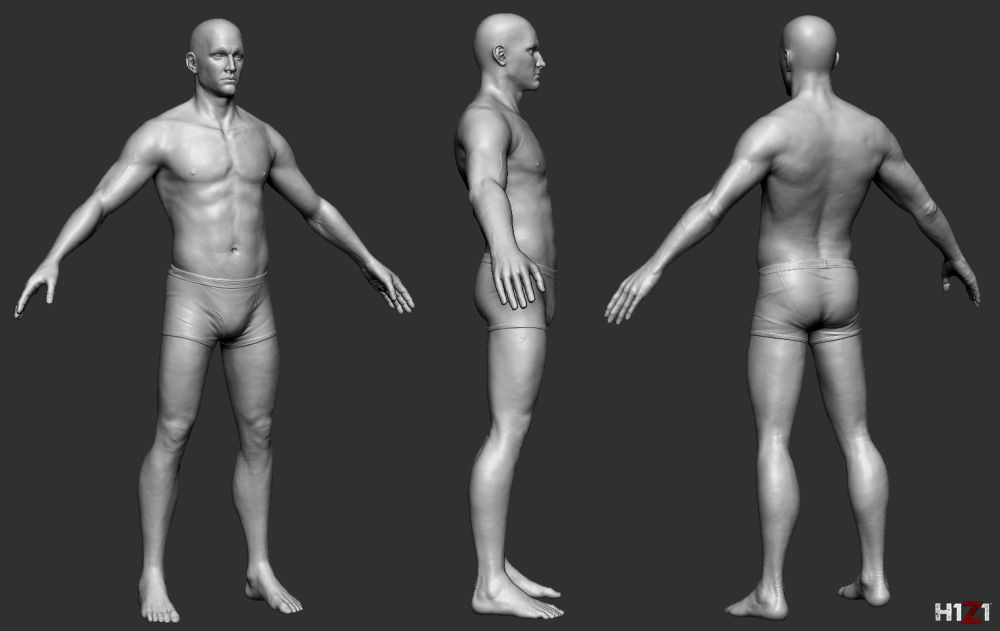 Once the male model was complete we got him in-game and tested each time-of-day with the new lighting revamp to make sure it looked accurate. 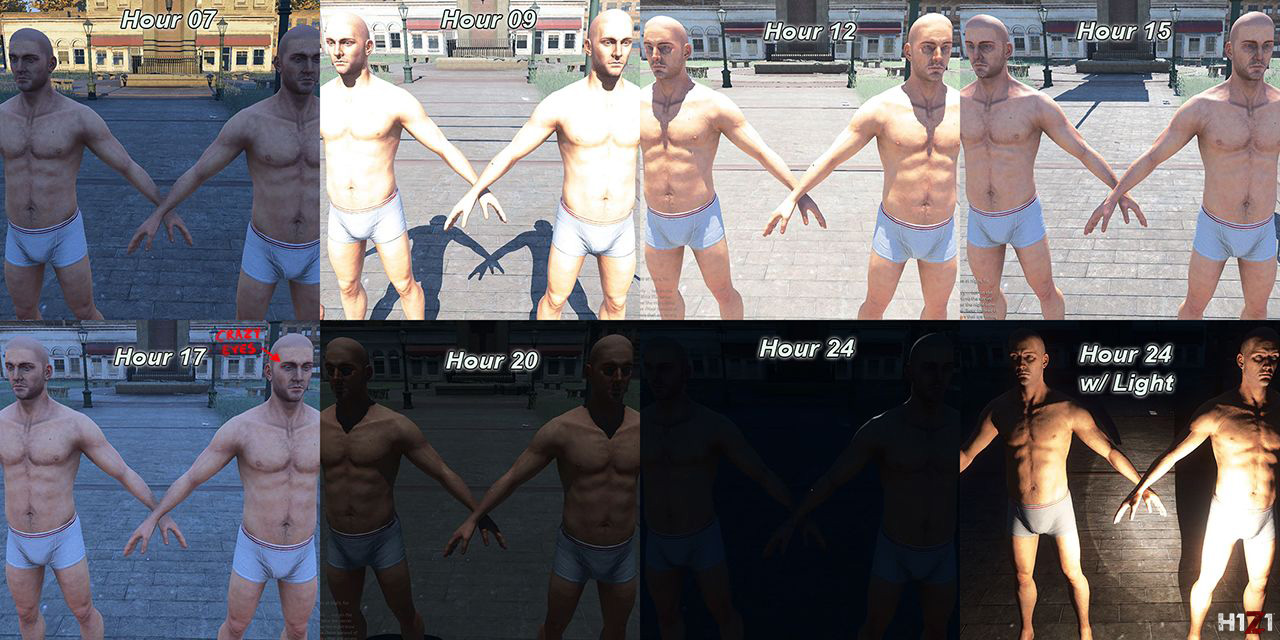 Finally, we built a new starter outfit to go along with the new model. Since H1Z1 takes place someplace in the Northwest USA, we thought a long sleeve Henley would be more appropriate and more interesting for the starter shirt. We made a paracord bracelet as a test for the 1st person camera model, but it may not necessarily make it in-game as a starter piece. What do you guys think? 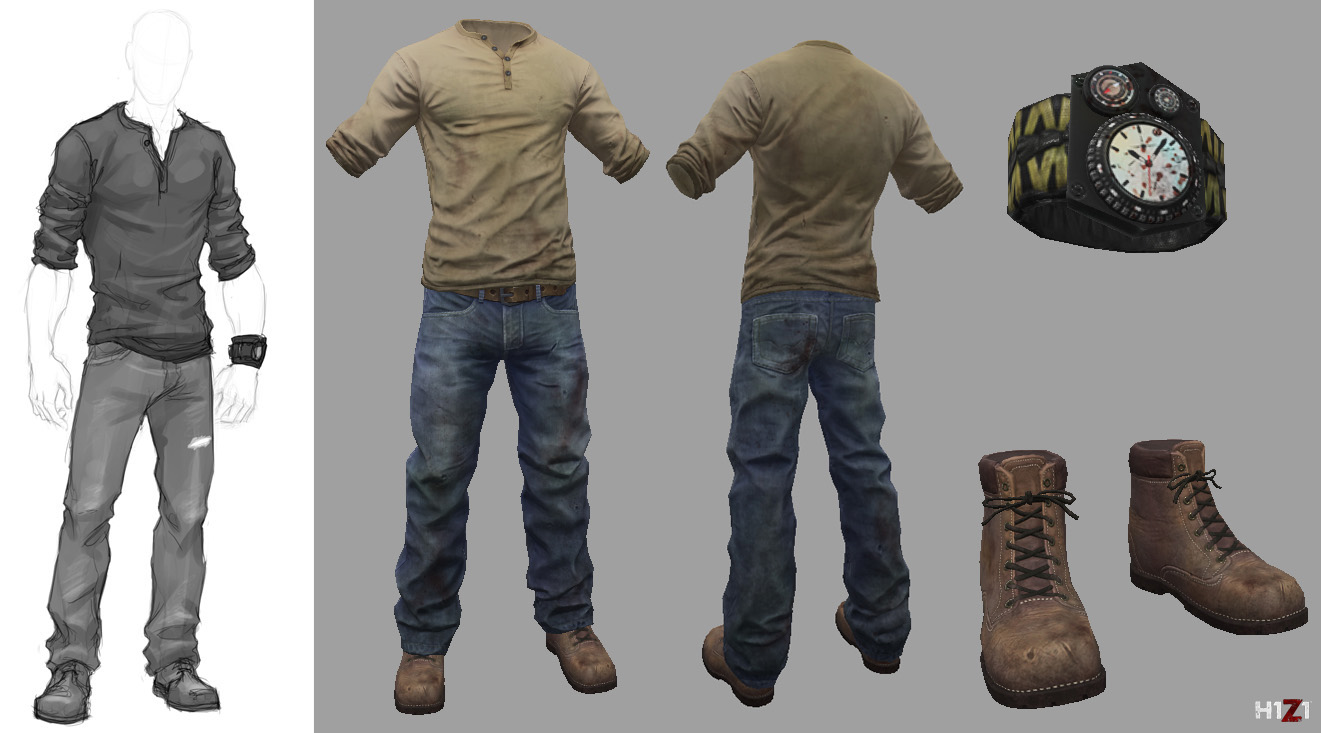 The last step for the male PC is getting all the animations hooked up to the new model with a new skeleton. We’re expecting to get him animated in-game by the end of this week and available to players mid-March. The wearable system isn’t ready, so no new clothing slots yet, but now that we’ve got the new model complete we can focus on that.

We started work on the female player character last week and I think it’s coming together very nicely. The same goals for the male apply to the female: we chose a relatively typical looking character, a little on the athletic side. The female model will be relatively the same height as the male model, so there will be no advantage in terms of hit target space. We are also creating male and female equivalent clothing. If you find a pair of jeans in H1Z1 as a male PC and wear them, you’ll have the male version visually; if you find that same pair as a female PC, you’ll have the female version visually. The clothes will basically be the same slightly modified to fit each gender. Nothing will be restricted to either gender and there will always be a 1:1 equivalent for each one.

Expect to see more progress on the female player character in the coming weeks; we’re aiming for an April release.

All this work is the first step toward a universal character system with more clothing slots to mix and match. Now that the models are almost done and in-game, we can focus on adding more wearable slots in addition to different heads/hair styles for players to choose, and start churning out a lot more clothing options too. Thanks for checking out our progress and hope you like the improvements so far!

Previous
Recapping the Hizzy Awards
Next
Does Your Loot Reside with the Legend of the Oathbound?